Indonesia successfully hosted the Asian Para Games in October. Not only did Indonesian Para athletes break their medal target like their fellow athletes competing in the Asian Games, the event made disability no longer invisible. 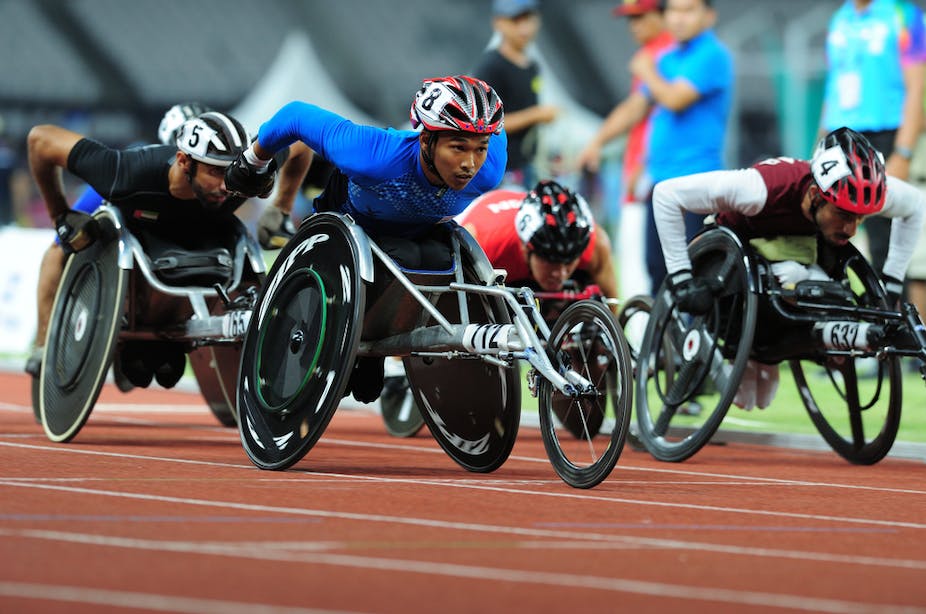 Athletes from Thailand in action during the Asian Para Games 2018. http://www.shutterstock.com/FocusDzign

For many Indonesians, it was probably the first time they had been exposed to people with disabilities and to the different abilities they possess.

Lack of inclusive schools has prevented people with disabilities from sustaining life pathways that would enable them to reach their full capabilities. The special schools have led to segregation and discrimination.

The general public does not understand the challenges faced by people with disabilities to exercise their basic human rights to live independent lives. Lack of accessible infrastructure, public facilities and inclusive policies prevent them from participating on a par with their non-disabled peers.

Hosting the Asian Para Games was a milestone for inclusion in Indonesia. It forced the government to build accessible infrastructure and strengthen the campaign to change attitudes – barriers that have hindered people with disabilities from being included in the life of society.

But the work for disability inclusion should go beyond hosting a sporting event. It needs a continuous sustained effort involving government down to the village level working together with people with disabilities.

An example of this is found in Plembutan village, in Gunung Kidul, Yogyakarta. Its administration has included promotion of inclusion of people with disabilities in their village development agenda since 2014.

The village recently hosted the Temu Inklusi (Inclusive Meeting), the third biennial gathering of Disabled People Organisations (DPOs). The meeting brings together DPOs from the eastern and western parts of Indonesia, other civil society organisations and government representatives.

The story of Plembutan village

Plembutan village is located in the district of Gunung Kidul and has 5,000 inhabitants.

The village leaders have been in talks with international organisationsand national DPOs such as SIGAB for a number of years. In 2017, the village released a decree to include vulnerable groups in village development.

The village is the only one in Indonesia so far that has introduced inclusive village regulation. This regulation allows Edi to allocate funding from the village annual development budget to develop a model of social protection for people with disabilities. This helps to ensure they can live independently with dignity and respect.

At least seven of the UN Sustainable Development Goals (SDGs) closely relate to the enhancement of the rights of persons with disabilities. Among these are social protection, quality education, economic independence, employment, inclusive public facilities and infrastructure and access to justice.

This year’s Temu Inklusi event, jointly organised by the Indonesian Coordinating Ministry for Human Development and Culture and Yogyakarta-based disabled people organisation SIGAB, aimed to contribute to efforts to implement the principles of the Convention on the Rights of People with Disabilities and the SDGs.

Disability activism in Indonesia has benefited from Indonesia’s political reform and democratisation. Indonesia started to see the founding of DPOs in the late 1980s and early 1990s. DPOs have been partnering with other civil society organisation and rights activists in influencing significant legal reform.

Indonesia ratified the Convention on the Rights of People with Disabilities in 2011. In 2016, it passed the Disability Rights Law.

The 2016 legislation originally required the Indonesian government to introduce 15 accompanying regulations. These would regulate various aspects of disability inclusion from inclusive public facilities, employment and social welfare to access to justice.

However, the government has now compressed those 15 to seven regulations. These cover planning, implementation and evaluation of the need of people with disabilities, accessible accommodation for legal services, and inclusive education, social welfare, accessible public facilities, incentive and concessions on services to people with disabilities. The law also requires the establishment of a National Disability Commission.

Progress in the drafting of these regulations has been slow as it requires cross-sectoral approach from various government ministries. These include the Ministry of National Development Planning, Ministry of Human Rights and Law, Ministry of Social Services, and Ministry of Public Facilities and Housing.

The Ministry of National Planning recently announced that the government will finally pass the regulation on appropriate accommodation for people with disabilities by the end of the year.

How to move forward?

An important insight from discussions at Temu Inklusi was that enhancing the rights of people with disabilities requires all sectors to work together. Practices at local level, such as in Desa Plembutan, resulted from the village engaging with organisations working in disability sectors.

Indonesia’s decentralisation and the introduction of Village Law in 2015 have given autonomy for villages to plan, prioritise and finance their development agendas based on their individual needs and priorities.

Currently, Indonesia lacks adequate national data on disabilities that might assist in properly planning for the prevalence of certain disabilities and particular needs of individuals. So, devolving responsibility to smaller administrative regions may work well as a strategy, for now.

As the campaigns for presidential and legislative elections have begun, we should look at what candidates are saying and plan to do to fulfil the unmet needs of people with disabilities.

This article is originally published by The Conversation

This site uses Akismet to reduce spam. Learn how your comment data is processed.